Ubiquitin is a small (76 amino acid residues) protein that is present in all organisms and, as the name suggests, is expressed ubiquitously in all cells. Ubiquitin is joined to other proteins (substrates) by a process known as ubiquitination. Ubiquitination creates a chain of ubiquitins on lysine residues of substrate proteins. The ubiquitin chain functions as an ID tag that marks proteins for degradation. Proteins tagged with ubiquitin chains are delivered to the proteasome, a large cellular structure in which protein degradation takes place.

All proteins, sooner or later, are degraded. Degradation is one means to regulate the amounts or activities of proteins in a cell. The ubiquitin-proteasome system (UPS) regulates virtually all cellular processes, such as growth, proliferation, migration, signaling, and death. Thus, impairments in the UPS cause many human diseases, including developmental retardation, neurodegenerative diseases, immune diseases, heart diseases, and cancer. The importance of the UPS was underscored by awarding of the 2004 Nobel Prize in Chemistry to Aaron Ciechanover, Avram Hershko, and Irwin Rose, who were instrumental in working out the biochemical details of the UPS.

Tagging substrate proteins with ubiquitin is a highly sophisticated biochemical process catalyzed by a cascade of three enzymes. First, ubiquitin is “activated” by being transferred to a ubiquitin-activating enzyme (E1); this reaction requires the energy-rich molecule ATP. Second, the activated ubiquitin is transferred from E1 to a ubiquitin-conjugating enzyme (E2). Finally, a ubiquitin ligase (E3) transfers the ubiquitin from E2 to a lysine residue in the substrate protein. The E3 ligase determines when, where, and which proteins are tagged by ubiquitin. Human cells possess several hundred E3 ligases, each specific for particular protein targets. Building upon this precise degradation system and 20 years of research experiences, scientists at Cullgen are exploring novel strategies to target selectively disease- causing proteins for the degradation by the UPS.

The majority of E3 ubiquitin ligases have a structure known as the RING finger. The RING finger mediates ubiquitin transfer from E2 to a target protein. There are several types of RING finger E3’s, the largest family of which is the cullin-RING ligases (CRLs).Cullin family E3 ’s associate with a small protein, ROC1 or ROC2, and bind substrates through a linker protein, such as DDB1 in the case of cullin 4 (CUL4), and a substrate receptor. Each cullin can associate with many different substrate receptors, leading to the assembly of more than 100 distinct CRL E3 ligases.

The modular assembly of CRL ligase complexes provides the flexibility to specifically target the degradation of a large number of substrate proteins. This flexibility can also be reprogrammed by small molecules to degrade proteins of interest. Recognizing its potential, scientists at Cullgen are developing small molecules to target the degradation of disease-causing proteins. Small molecule-mediated selective targeting of protein degradation is an unprecedented opportunity in drug discovery and has several advantages over traditional drug discovery strategies. These advantages include the high degree of target specificity that can be rapidly validated, the potential to reduce systemic drug exposure, and the ability to counteract increased target protein expression induced by the inhibition of protein function. Importantly, unlike most drugs, small molecule-induced protein degradation is not limited (or even directed) to the functional sites of enzymes. Importantly, small molecule-induced protein degradation can be applied to target proteins that are not currently therapeutically tractable, such as transcription factors, scaffold, and other non-enzyme regulatory proteins. Cullgen’s ubiquitin-mediated, small molecule-induced target elimination technology, uSMITETM is at the forefront to develop novel therapeutics for individuals with various diseases, including inflammation, autoimmune diseases, neurodegenerative disease and cancer. 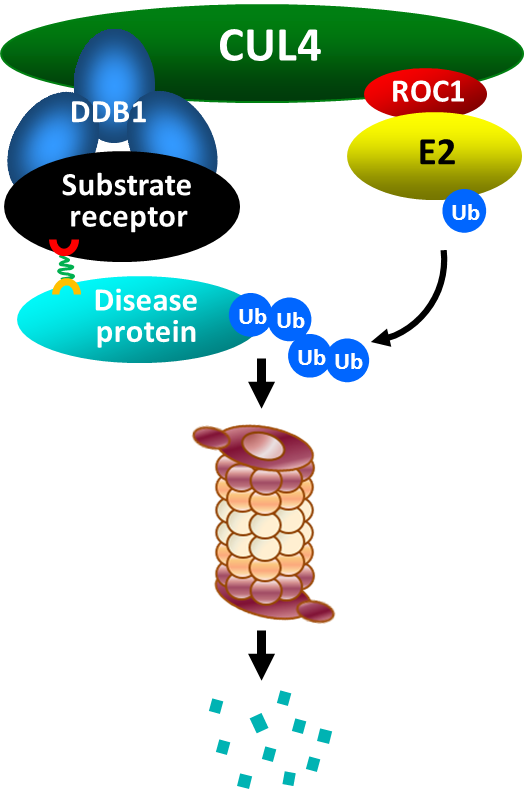